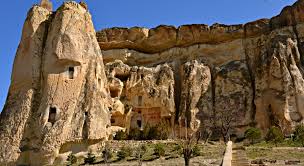 At the Cavusin old town, the church of St. John the Baptist rises on top of the hill. The church was built in the 5th century and it is the biggest cave church of Cappadocia even though it was divided into three rooms in 10th century against danger of collapsing. Most of the frescoes of St. John the Baptist church are faded by smoke but there are still some visible ones. Its cathedral-like proportions are also astounding. 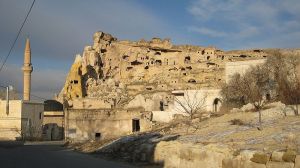 Cavusin (Nicephorus Phocas) Church: This barrel-vaulted church, with one nave and three apses, is situated 2.5km from Goreme on the Goreme-Avanos road. Its narthex is collapsed. The church was built around 964/965.

Scenes: On the vault are the Annunciation, Visitation, Proof of the Virgin, Flight into Egypt, Joseph’s Dream Ii, Blessing and Mission of the Apostles, Adoration of the Magi, Massacre of the Innocents, Pursuit of Elizabeth, Killing of Zacharias; on the west wall are Entry into Jerusalem, Raising of Lazarus, Healing of the Blind Man, Descent from the Cross, Women at the Tomb; on the wall of the apse the Transfiguration; on the north apse Emperor Nicaphorus Phocas and his family, which held power and authority in Cappadocia.

How to in Cappadocia