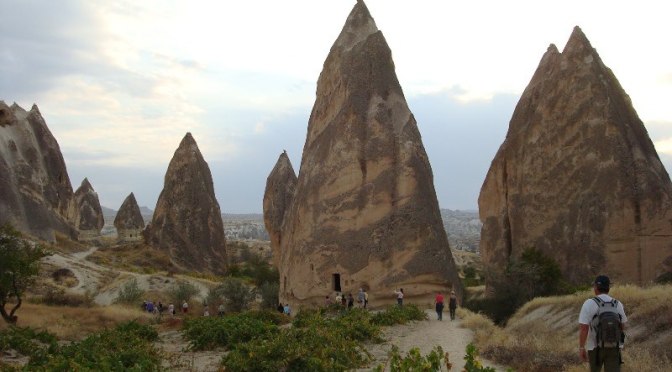 Cappadocia (/kæpəˈdoʊʃə/; also Capadocia; Turkish Kapadokya, from Greek: Καππαδοκία / Kappadokía, Persian: کاپادوکیه‎Kāpādōkiyeh) is a historical region in Central Anatolia, largely in Nevşehir Province, in Turkey. In the time of Herodotus, the Cappadocians were reported as occupying the whole region from Mount Taurus to the vicinity of the Euxine (Black Sea).

The name was traditionally used in Christian sources throughout history and is still widely used as an international tourism concept to define a region of exceptional natural wonders, in particular characterized by fairy chimneys and a unique historical and cultural heritage.

The earliest record of the name of Cappadocia dates from the late 6th century BC, when it appears in the trilingual inscriptions of two early Achaemenid kings, Darius I and Xerxes, as one of the countries (Old Persian dahyu-) of the Persian Empire. In these lists of countries, the Old Persian name is Katpatuka, which is of uncertain origin.

Cappadocia is also mentioned in the biblical works.The Cappadocians were named as one group hearing the Gospel account from Galileans in their own language on the day of Pentecost shortly after the resurrection of Jesus Christ. It seems to suggest that the Cappadocians in this account were “God-fearing Jews”.

Under the later kings of the Persian Empire, the Cappadocians were divided into two satr governments, with one comprising the central and inland portion, to which the name of Cappadocia continued to be applied by Greek geographers, while the other was called Pontus. This division had already come about before the time of Xenophon. As after the fall of the Persian government the two provinces continued to be separate, the distinction was perpetuated, and the name Cappadocia came to be restricted to the inland province (sometimes called Great Cappadocia), which alone will be the focus of this article.

The kingdom of Cappadocia was still in existence in the time of Strabo as a nominally independent state. Cilicia was the name given to the district in which Caesarea, the capital of the whole country, was situated. The only two cities of Cappadocia considered by Strabo to deserve that appellation were Caesarea (originally known as Mazaca) and Tyana, not far from the foot of the Taurus. 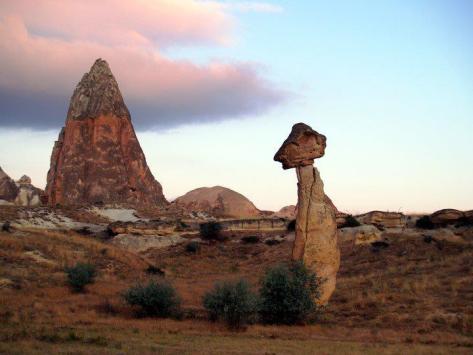 Cappadocia lies in eastern Anatolia, in the center of what is now Turkey. The relief consists of a high plateau over 1000 m in altitude that is pierced by volcanic peaks, with Mount Erciyes (ancient Argaeus) near Kayseri (ancient Caesarea) being the tallest at 3916 m.

The boundaries of historical Cappadocia are vague, particularly towards the west. Due to its inland location and high altitude, Cappadocia has a markedly continental climate, with hot dry summers and cold snowy winters. Rainfall is sparse and the region is largely semi-arid.

Cappadocia was known as Hatti in the late Bronze Age, and was the homeland of the Hittite power centered at Hattusa. After the fall of the Hittite Empire, with the decline of the Syro-Cappadocians (Mushki) after their defeat by the Lydian king Croesus in the 6th century, Cappadocia was ruled by a sort of feudal aristocracy, dwelling in strong castles and keeping the peasants in a servile condition, which later made them apt for foreign slavery. It was included in the third Persian satrapy in the division established by Darius, but continued to be governed by rulers of its own, none apparently supreme over the whole country and all more or less tributaries of the Great King.